Woo... Episode 2!  This one's a two part episode because I ended up running long on both of the main questions.  I think it's gonna take a few more episodes before I get the hang of keeping things short (i.e. concise answers that don't veer too far off topic and don't provide an inordinate amount of somewhat related information).

I may just need to limit the number of demonstration-related questions covered in each episode...

As usual, I uploaded the videos in 720p HD, so you may want to view the videos through YouTube directly rather than here on the blog.

That's right, I've finally gotten my video question and answer series off the ground... all I need now is for people to send questions to questions(at)petrastech.com so that I'll have the content necessary to keep things moving along.

Anyway, the first episode (intro & PS3 HDD swap) is below and, since I uploaded the video in 720p HD, you may want to view the video through YouTube directly rather than here on the blog.  Let me know what you guys think!

The DDC: An Ongoing Saga

Some of you may have heard about Laing introducing a new motor control PCB for their line of DDC pumps to allow for support of PWM impeller speed control and you may have also heard that these new boards cannot be modified in the same way as the original DDC-3.1/3.2 control boards could to toggle pumps between DDC-3.1 and DDC-3.2 spec.  Well, it's true.  I haven't had the opportunity to experiment with one of the new pumps yet to see if there's a workaround but, in the meantime, here are some thoughts of mine regarding the original DDC-3 control PCB pulled from a conversation on XS:

If you do feel like reverse engineering one of the pumps yourself, this may be of some use (it's a link to the datasheet for the microcontroller that Laing used in the standard DDC-3.1/3.2 pumps). ST Microelectronics model 7FLITE35F2M6

I do have a bit of concern over whether or not Laing would have moved the RPM ceiling value into the microcontroller's programming for the PWM version (e.g. a different programmed ceiling for each model, rather than a switch/solder pad to toggle between operating modes). I'd have to do some experimenting with one, I suppose... but it would probably make more sense from a cost control standpoint to keep the method of the toggle as simple as a bridged solder pad.

For anyone who's interested, here's a picture of the original DDC-3.1 PCB: 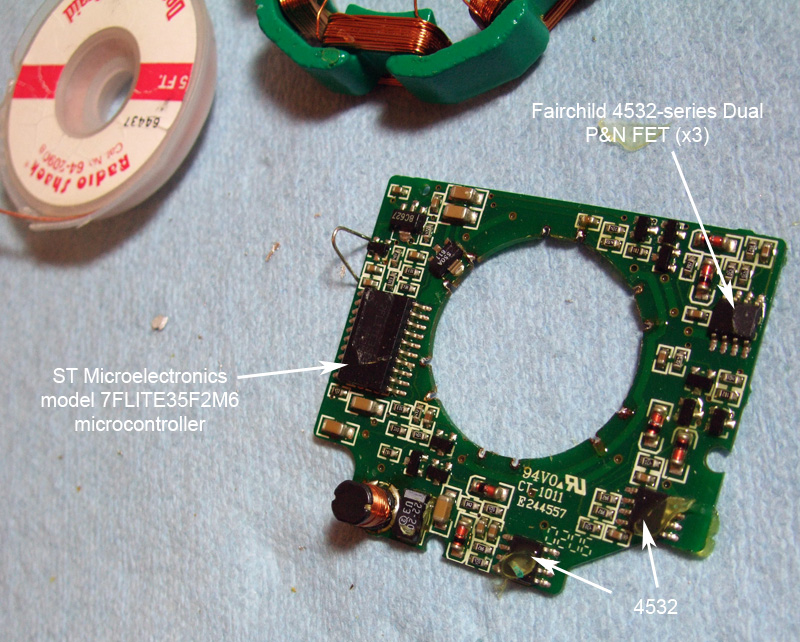 ...and the datasheet for those Fairchild FET's can be found here (pretty sure it's right, closest match I could find).

We can make guesses and experiment by feeding the microcontroller different inputs, but it will always be a "black box" of sorts without the code they programmed it with. So, really, there's only so much reverse engineering that we can do (not to say that a toggle for the newer pumps couldn't be found).
Posted by Alex at 10:53 AM No comments: