The EPA and you.

Some of you may have read about the EPA's proposed new ratings system for automobile fuel efficiency and emissions:

Well, I decided that I'd add to things by coming up with my own ratings system that consumers would more easily be able to relate to the environment, as opposed to misinterpreting the EPA's letter grade as a judgment of the car as a whole. Then again, any car that'll save you -$6900 over the course of five years and is likened to an atom bomb detonating by the EPA must be a really awesome ride. Let me know what you think ;-p 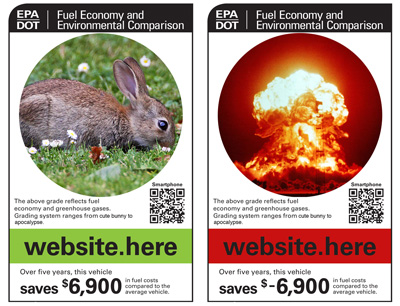 Email ThisBlogThis!Share to TwitterShare to FacebookShare to Pinterest
Labels: musings

What's the first thing you think of when you're jarred awake by a sudden, deafening thunderclap shortly followed by rain, the noise from which can only be described as a roar, in the middle of a summer afternoon... and you notice that the air conditioner is running?

Well, if you answered "Hmm, if it's still 103°F outside, then the increase in humidity that'll result from this rain will even further reduce the efficiency of our central air conditioning system," then you and I are a lot alike because this is exactly what occurred about two days ago. What's particularly fascinating to me, in retrospect, is the chain of thoughts which resulted from this very simple starting point. They went something like this:

"I wonder if the evaporative cooling effect caused by rainwater being sucked through the condenser would offset the efficiency loss caused by increased ambient humidity? How much of an overall efficiency gain could be had by setting up a simple condenser sprayer/mister system? What about building a water jacket for the condenser or putting together a refrigerant-to-water heat exchanger and plumbing it to a large evaporative cooler (Engineering folks: think a small cooling tower. Computer water cooling folks: think a really big bong cooler)? Taking the evaporative cooler approach, you'd be able to improve heat transfer by attaining a larger temperature delta between the condenser and the fluid cooling it than would otherwise be possible with direct-to-air cooling."

To complete what ended up turning into a mini engineering thought exercise I, of course, had to also go through some of the disadvantages associated with such experimentation which boiled down to:

- Cost to construct a sufficient evaporative cooling system vs. possible electricity savings from improved system efficiency (experimentation would have to start with a mister system and small scale condenser immersion testing with a cheap wall-mount air conditioning unit to determine project feasibility).
- Increase in household water usage during the months the evaporative cooling system is in use.
- Increased cooling system complexity (and a corresponding drop in likely reliability).
- Increased cooling system maintenance (lines and fittings would need to be checked for leaks, circulation pump intake filter(s) would require cleaning, the cooling system would have to be manually topped-up regularly (if an automatic coolant reservoir refill system isn't constructed), fan intake filters (if used) would require cleaning, coolant would have to be treated to mitigate biological growth, mineral deposits, and possible corrosion (if incompatible metals are used in the absence of a sacrificial anode), etc.).

I realize that, to most, this entire idea would probably come off as being rather ridiculous but, regardless of the merits of the original idea, it's the process that's important here. I constantly launch into this sort of thinking and it can be sparked by practically anything... after all, how else are we supposed to keep our minds sharp?