In late 2008, I was contacted by an employee of Corsair Memory and we worked out a deal for PTS to take some excess inventory off their hands for a very attractive price. The excess inventory in question consisted of 300 Laing D4 pumps which had been purchased by accident sometime in either late 2004 or 2005 as well as 350+ steel Rev. 1 Swiftech RadBoxes. Naturally, I had to run a quick performance comparison test against a pump that people were familiar with, since the D4 is old enough to where many had no experience with it. Total forum thread views: 1,574 (as of 5/03/2010). As a side note, all images have been re-sized via HTML, rather than my usual two image (preview & full image via link) approach, to speed along the archiving process. You can still right-click on the images and view them at full-size in a new tab/window. Also note that all vBulletin emoticons and their associated code have been removed from the archive entry.

Okay, well, anyway, I was curious as to how the 'ole D4 would stack up against the D5 Basic... so, onetwothreego!

A quick photo of the test setup:

Each data point collected represents the mean of three trials, with 30 seconds of pressure data logged and averaged per trial (for a total of 90 samples per final data point). The reason for multiple trials and somewhat excessive data logging was to help mitigate any fluctuations in pump output and issues with the nut on the handlebars (e.g. anthropogenic flowmeter read error).

...and here's the resulting performance curve with power consumption: 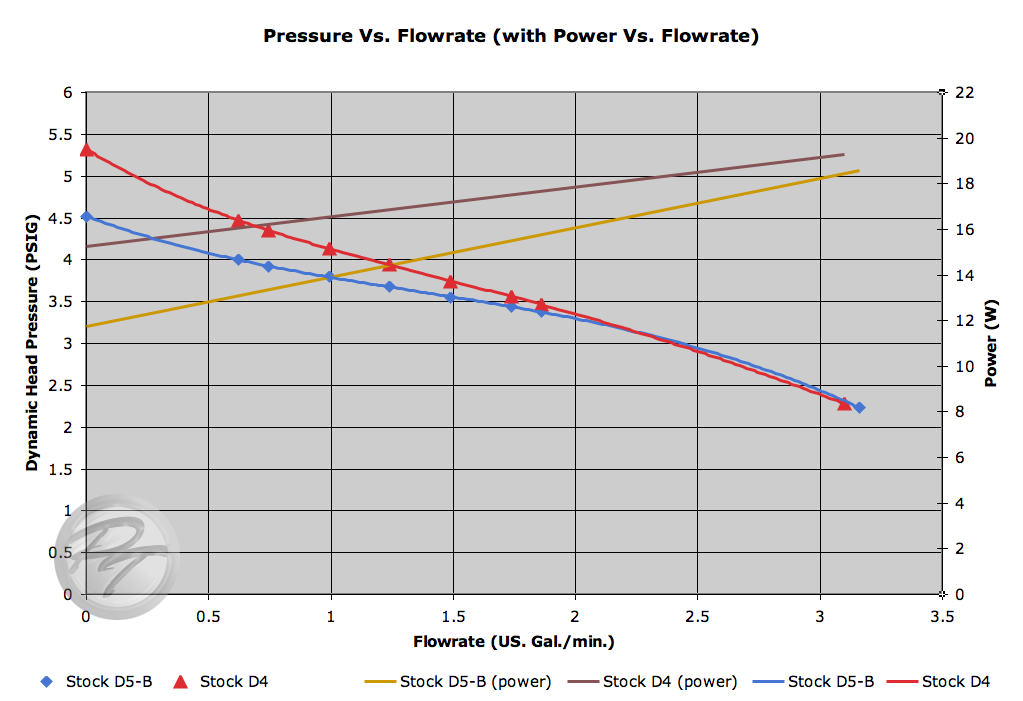 ...the chart that the data for the graph was pulled from: 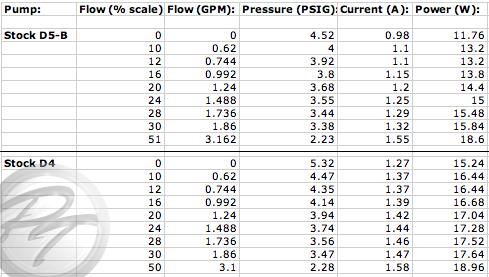 With Laing's & Swiftech's specs for the D4 putting it so close to the current D5 Vario, I can't say that I'm terribly surprised the D5 Basic got walked over. I did, however, note a noticeable difference in the acoustic quality of the two pumps--the D4 has a much more pronounced electronic 'buzz' and is a bit louder than the D5.