In March of 2007, I announced a minor revision to my DDCT-01 performance enhancing DDC pump top and with that revision, of course, came more testing. Total forum thread views: 11,926 (as of 4/29/2010). As a side note, all images have been re-sized via HTML, rather than my usual two image (preview & full image via link) approach, to speed along the archiving process. You can still right-click on the images and view them at full-size in a new tab/window. Also note that all vBulletin emoticons and their associated code have been removed from the archive entry.

Hey everyone... I'm back with another round of DDC testing for your viewing enjoyment. However, this time, rather than doing somewhat crude comparative testing, I've gathered some more equipment and decided to go for some spiffy pressure vs. flow curves with power consumption. This will, hopefully, provide a clearer picture of overall pump performance for everyone.

Now, before I get started, let me just say that I've already run my data past my Laing contact and they indicated that my data is good (I say this now because I'm sure that a few of you won't be too happy with the data). Additionally, I'll have to wait 'till early next week to post photos of pumps and stuff because I have to take off early today.

18W DDC-2TPMP - This is the standard, red impellered DDC-2 that's available in the US. It'll be tested stock, with my DDCT-01 top, my new DDCT-01s top, and as Frankenpump (see below).

18W DDC-3.2VCTP - This is one of the new 18W, blue impellered pumps that's readily available in Europe but hasn't really hit the US market yet. In case you're wondering about the model number, this pump started life as a volume compensating DDC, but it has been modified by Laing to remove the volume compensator. Despite utilizing a v3.3 motor control board, the official name for the pump is the DDC-3.2 (more on this later). The blue impeller does have a smaller inlet (~9mm vs. the red impeller's 12mm inlet) and it is also slightly smaller in diameter (~36mm vs. ~36.75mm). Some other changes include the lengthening of the pump's startup procedure, a newly redesigned motor, RoHS compatibility, and the elimination of the DDC-2's nasty 4A overshoot at startup (which I happen to think may be, at least in part, responsible for the very early death suffered by several DDC-2's...but I still have some research and a lot of testing to do to see if this is the case). This pump will be tested stock and with my new DDCT-01s top.

The Frankenpump - Frankenpump is basically a DDC-2TPMP with a DDCT-01s top and a blue impeller, borrowed from the DDC-3.2VCTP. Please don't jump to try this at home as Frankenpump wasn't a very happy monster...

The DDCT-01s Top - This top is a very small revision to my original DDCT-01 design, which was mainly done to provide compatibility with the blue impellered DDC pumps. I was also able to eek a tiny bit of extra performance outta the old design in this revision. Make no mistake, this is not the DDCT-02 (that's something that's still in development). The DDCT-01s should be available by sometime next week as they're at the shop being made right now. However, if you're interested in making your current DDCT-01 top compatible with the blue impellered pumps, then all you have to do is remove the inlet ring with a Dremel (I'd advise using a flat-tipped tungsten-carbide bit and cleaning any burrs up with an X-Acto knife).

Lacking an appropriate flow meter, I filled a container of known volume (verified very slowly with a graduated cylinder meeting ASTM Class B, E1272 spec.) from 0.5 Gal. to 4.5 Gal. and carefully measured the filling time at various head pressures (each data point collected the mean average of 3 trials, head pressure/flow was controlled with a gate valve just after the pump's outlet, and head pressure was monitored with one of my new pressure gauges [4" gauge face, glycerine filled to eliminate/reduce needle jitter, + or - 1% full scale accuracy, 0.2psig markings (pretty easily approximated to 0.1psig)]). All tests were carried out at 12.00V (measured at the pump's power connector, so it doesn't take into account the minimal resistance presented by the pump's 22ga. power wires) utilizing an HP 6264B variable DC power supply. Oh, yeah, and the charts may look a little cluttered but they're not nearly as bad as the chart with all of the data that I collected (and am still collecting) on it. 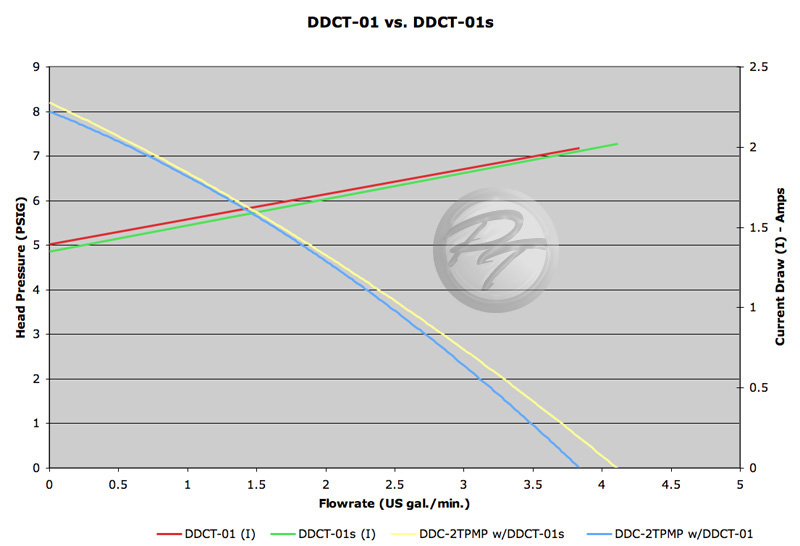 Moving on, here's a comparison of the DDC-2TPMP and the DDC-3.2VCTP in their stock form and with the DDCT-01s top. This one is a little messy but it's pretty clear that the newer DDC isn't doing so hot, with its substantially lower max. head pressure. Interesting to note the power consumption of the new pump, though--it starts a lot lower and ends higher than that of the DDC-2TPMP. Granted, with very low pressure drop waterblocks on the market now (like the D-Tek FuZion), the DDC-3.2 still stands as a good little pump for our purposes. 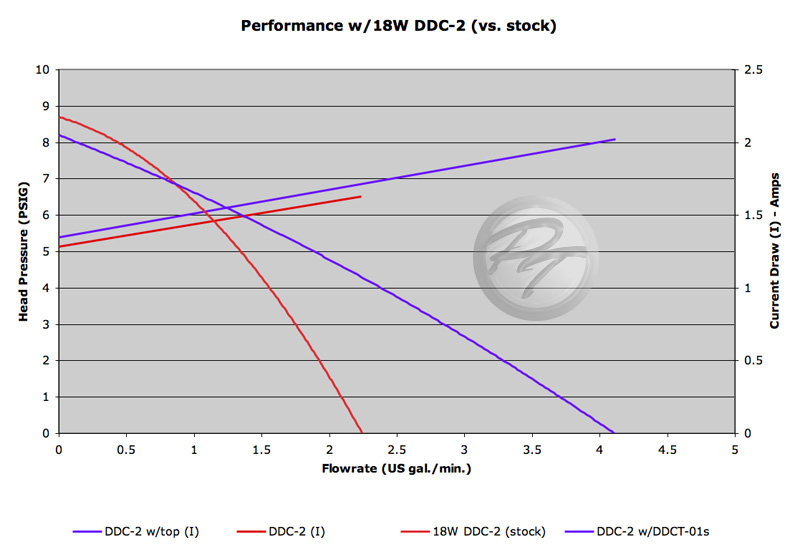 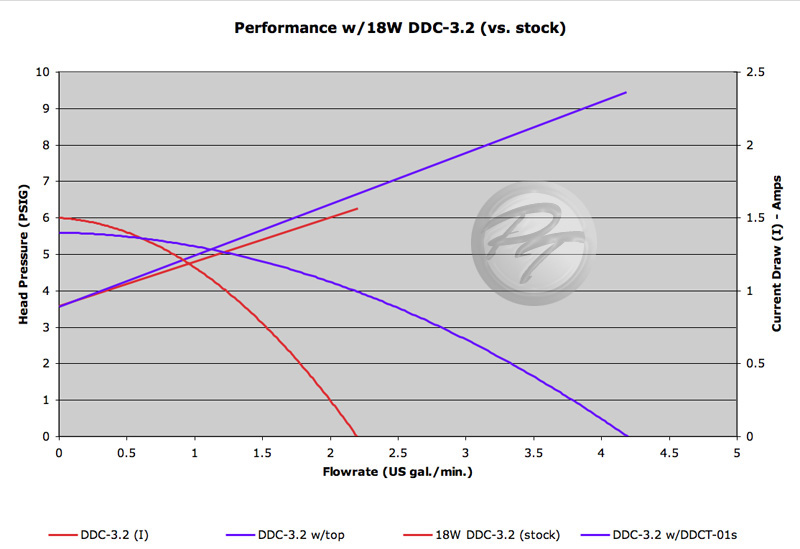 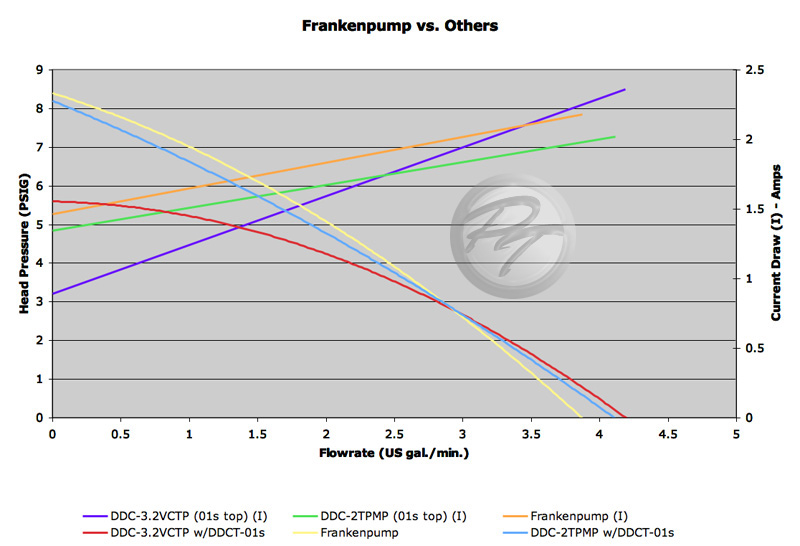 Now, the reason I decided to do the Frankenpump test is because I wanted to drive home the point that I had made previously: the majority of the changes and the reason for the performance difference both lie in the new pump's motor, not the impeller. Drop the blue impeller into a DDC-2TPMP and you get higher head pressure and marginally better flow...and a lot of angry noises & vibrations. Interestingly, power consumption also went up considerably.

A lot of you are probably somewhat disappointed with the performance of the new 18W DDC-3.2 and, honestly, so am I. However, we likely won't be seeing them show up in the US through retail channels for about another 6 months or so. In the meantime, however, Laing is scrambling to make a version of the new DDC with performance equivalent to that of the DDC-2. Only time will tell whether they manage to get a production commitment, but, if it does go into production, it'll likely surface as the DDC-3.3.

I have more information, commentary, and photos to add to this but it'll have to wait until next week as I'm going to be out of town this weekend... and, speaking of which, I'm already an hour behind schedule (go figure).

Okay, I mentioned in another thread that I was going to post some data for the Iwaki RD-30 at 18.1V and, well, here it is!

Keep in mind that this is just a graph of the raw RD-30 data vs. the refined data for the DDC-2 w/top. The reason that I'm presenting the RD-30 data this way is due to the irregular shape of the curve and how difficult it would have been to create an accurate fitted curve for the data set (the data for the DDC's all came out to be pretty parabolic, so an accurate fitted curve was a snap). Additional tests only worked to confirm the linearity of the performance curve at higher head pressures, so this is how I'm presenting it to you. Also, power consumption in this chart is presented in Watts, instead of Amps, because the pumps were running at different voltages. 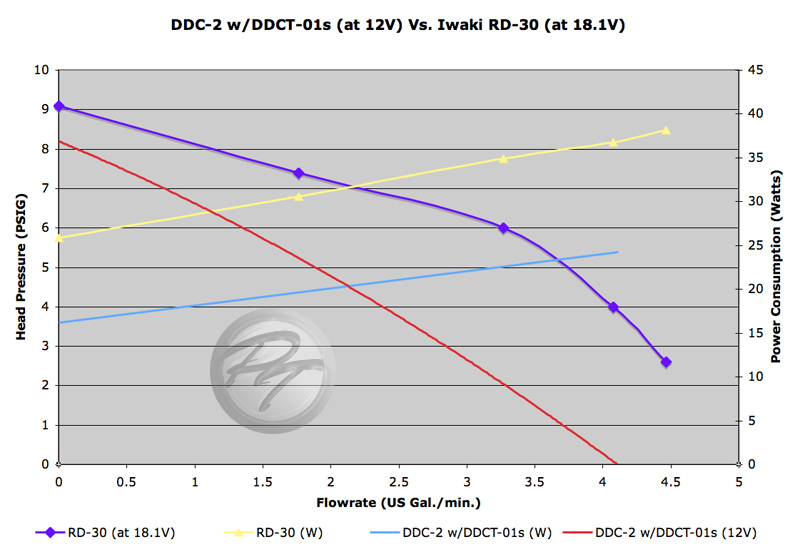 As you can see, even at 18.1V, it's substantially more powerful than the DDC-2... but its power consumption is also quite a bit higher than the DDC-2's. At 18.1V, the RD-30's head pressure topped out at 9.1 PSIG (~21 feet -- 6.4m) and the flow was pretty impressive. Honestly, though, comparing that to Iwaki's performance curve for the RD-20 at 24V (found HERE), the RD-20 at 24V may be a better choice in pump than an undervolted RD-30 (especially if you're running the pump above 6 psig). Granted, I don't have any power consumption information for the RD-20 but, if it proves to use less power than the undervolted RD-30... really, it depends on what you want to do with the pump, though.

UPDATE (again): After getting the RD-30 onto my testbed, I've noticed a couple oddities that I'll have to investigate further... the results of which may cause me to redo the above performance curve.